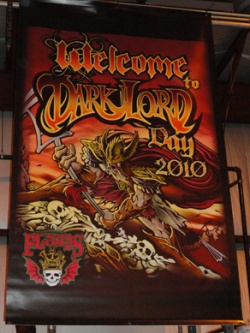 Dark Lord Day 2010 was held on Saturday, April 24th. An estimated 12,000 beer fans attended, making it one of the highest attended Dark Lord Days. The huge crowds forced Three Floyd's to make big changes to the festival in 2011. In previous years, the line to purchase Dark Lord stretched either North up Indiana Parkway towards Superior Drive, or South down Indiana Parkway towards Progress Ave. This year however, two lines formed; one from the North and one from the South. These two lines converged upon the brewery parking lot and combined into a mass of confusion. These lines were also mixed up with the draft and food lines also present in the parking lot. Lack of barriers, or direction from Three Floyd's staff resulted in much confusion as to what line went where.

Another issue this year was the use of counterfeit tickets. Since all Golden Tickets were identical, with no barcode or unique identifier, they were easily counterfeited. Three Floyd's staff became aware of this issue, but decided to honor counterfeits as many people purchased them online, not realizing they were fakes. As a result, the allotment had to be cut from 4 bottles to 3 bottles around 3:00 pm.

An estimated 8,000 tickets were sold, however the event was still open to anyone. Three Floyd's announced that after the 5:00 pm cutoff for Golden Ticket holders, Dark Lord sales would be open to anyone.

Randy Mosher was there signing his Tasting Beer and Radical Brewing books.

You could use two tickets per person for an allotment of 8 bottles. You also had the option of substituting one of your bottles for a 2009 Dark Lord at a cost of $20.

Allotment had to be cut to 3 bottles per ticket, late in the day, due to counterfeit tickets.

The brewpub was open for the event.

"The only way to ensure that you'll get some Darklord is to purchase a ticket online. The proceeds from the sale of these tickets go to a local charity. These tickets will go on sale on March 17th. The time of the sale is yet to be announced. We will announce the sales details of the tickets on Twitter followed by posts on the Darklord day web site as well as the Rate Beer and Beer Advocate web sites."

People stayed up all night in anticipation of the Tweet going out early in the morning, as lottery emails had gone out early in the AM in 2009. The tickets did not actually go on sale until around 7:00 pm Central.

Golden tickets went on sale at 7:05pm CST on March 17th and the servers had issues with the large volume of traffic, with many users reporting they were unable to get the site to load. Users were able to purchase up to two tickets. The tickets sold out in about one hour.

Each Golden Ticket included one free pour of Dark Lord, which could be upgraded to a barrel aged Dark Lord for $5. 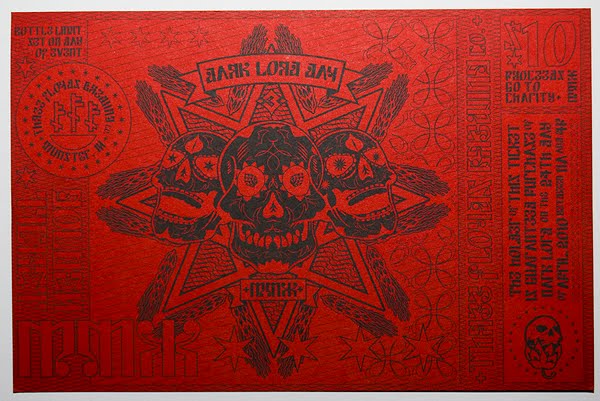 This was the first year Intelligentsia Coffee was present at the event. They were serving espresso.